Europe on a Budget: Choose budget hotels and airlines for budget travel that won’t break the bank

Want to see some of Europe on a limited budget?

If you combine budget hotels and budget airlines you have budget travel! You’ll see more than you’d think – and in greater comfort that you’d imagine.

This blog is aimed at North American travelers who want to see Europe. Perhaps you have tried backpacking, Eurail and hostels in the past – maybe this will be your first time. This year, 2016 could be the best time ever to see Europe on a budget and you can avoid overnight trains and hostels! 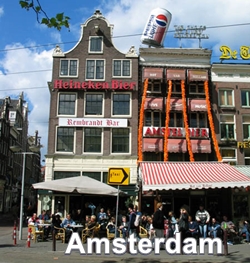 Where to go on your budget trip to Europe

Your transatlantic flight is likely to be a substantial portion of the total cost. Prices are significantly lower on routes with the greatest competition. Direct flights to Barcelona or Rome may seem a great idea but you are likely to save by flying first to a budget airline “hub” such as London Gatwick or Amsterdam. Both these airports offer budget flights to all the corners of Europe. I recommend a flexible fight search engine such as www.skyscanner.net. This site allows you to see the cheapest flights over a month long period or even the cheapest flights from an airport to “Everywhere”. This tool often reveals one-way international tickets within Europe for less than $50. Buy tickets individually. If you use multi-flight options on ticket websites more often than not you will be limited to tickets from legacy carriers in the main airline alliances – and pay heavily for the privilege.

Yes, using airports is a pain but security tends to be more efficient at European airports, within the 15 Schengen zone countries there are no immigration or customs checks (just like flying “domestic”) and all airports have public transit into city centres or nearby resorts.

Europe is relatively small compared to North America. From a central point like Geneva you can be in most cities in Europe within 3 hours. Stick to non-stop budget flights and you wont waste more than half a day travelling from destination to destination.

Where to stay when travelling on a budget in Europe

The short answer is that you want to pay as little as possible for the level of comfort and convenience you are happy with. There are some great websites out there that do much of the work for you. Check out www.budgethotels.com This is a hotel price comparison tool. It will show you prices from a range of big brand hotel suppliers. You will see who offers the lowest price and you can be sure you won’t be overpaying. This site covers all levels of comfort from 5 star luxury to budget hotels, cheap hotels and hostels. Start with your destination and dates and filter the results by star grade, facilities and price and you will soon find your perfect accommodation for your travel budget. Budget travel is within your grasp. Go out and explore!