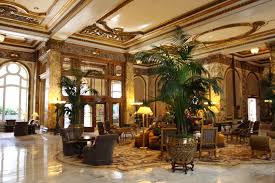 Celebrities aren’t the only things famous in California.  If you’re traveling to The Golden State, where you stay can be as newsworthy as who you see.  Take in the ambiance at these signature hotels, and you’ll feel like a member of the A-list.

Hollywood Roosevelt – Los Angeles
Located in the heart of Tinseltown along the Hollywood Walk of Fame, this mainstay drips of old L.A. glamour.  Founded in 1927 by a group of Hollywood notables, this locale continues to live up to its storied past as the place to see and be seen.

Walking distance to Grauman’s Chinese Theatre and the Kodak Theatre, the Hollywood Roosevelt hosted the first Academy Awards in 1929 and its share of celebrities over the years.  Reserve a room at the Roosevelt and you can say you’ve slept where Marilyn Monroe once slept.

After taking in the sights, spend time imbibing at one of the hotel’s notorious eateries.  Visit 25 Degrees for a taste of old Hollywood, where you can order what has been hailed as the city’s best burger.  Outside, the Tropicana Bar surrounds a poolside retreat where guests swim above an underwater painting by artist David Hockney.

The Fairmont San Francisco
Seated upon Nob Hill, the Fairmont San Francisco has offered panoramic views of the City by the Bay since 1907.  You’ll find easy access to the Financial District, Fisherman’s Wharf and Union Square, partly due to the hotel’s location at the single spot in the city where each of the fabled cable car lines meet.

The Fairmont boasts of prime location as well as history.  Visitors can expect the Fairmont to emphasize premiere service, as it was home to America’s first concierge in the 1970s.  Also, the hotel’s Venetian Room is famous for being the spot where Tony Bennett first sang his signature homage to the city, “I Left My Heart in San Francisco.”

Hotel del Coronado – Coronado
For more than 120 years the Hotel del Coronado has been a premier destination on the Pacific Coast.  Located on 28 beachfront acres, the resort sits across the bay from downtown San Diego, accessible by a 15-minute ferry ride.

With its mixture of Victorian architecture and sun-dripped beaches, the hotel is one of only a few in California that holds National Historic Landmark status.  Countless notables have visited throughout the years, including King Edward VIII, Charles Lindberg, Humphrey Bogart and modern celebrities.

What are your favorite hotels in California?