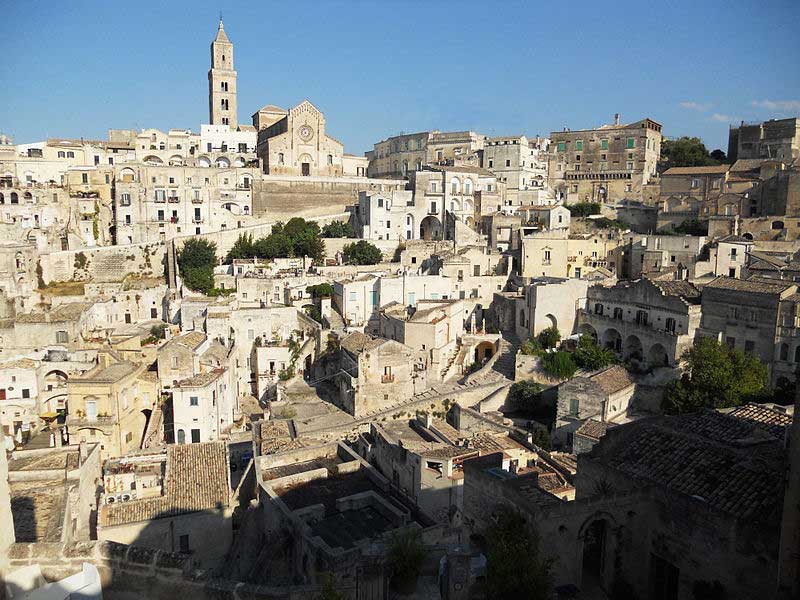 Until recently Matera, Basilicata, in the south of Italy, was never really considered a tourism area and was largely overlooked by travellers.  The town lies in a small canyon carved out by the Gravina and has a population of about 63,000.

Today, the lure of Matera is the extraordinary labyrinth of cave dwellings, known as I Sassi or The Sassi of Matera.

I Sassi of Matera – Cave City in the Mountains

This enchanting region has suffered a bitter past. Matera had been one of the most impoverished cities in Italy and, even by the disadvantaged standards of the south of Italy in general, it has a history laced with adversity.

To understand Matera, you have to understand both its geography and its history.  Matera is situated on a ridge, surrounded by two large ravines, with indentations of naturally formed caves traversing the mountains. For nine centuries, these caves have been inhabited and are the longest continuous habitation of this kind in Italy.  The caves housed fugitives from Metapontum and Heraclea during the Punic Wars. Centuries ago, these caves would have been a natural place to find shelter and it made sense that they became the home of many.  As homes were shaped, and communities formed, including more than 130 rock-hewn churches, some of them underground.

Fast forward to the twentieth century and the awareness that 20,000 people now lived in the caves. The knowledge is heartbreaking. The poorest of this area took up residence within these naturally forming caves, and, over time, carved ever deeper into the recesses of the mountain, creating both primitive homesteads and ultimately a community of outcasts of society, perched high amongst the hillside. The material removed from the mountain became the façade of one dwelling and the walkway of a dwelling above.

The worst poverty you can ever imagine doesn’t even come close to the indignities suffered by the 20,000 peasants living within the I Sassi.  Half the people died of disease. There was no sanitation or heat, and little light. Many lived side by side with their livestock.  Most living there were illiterate. Half the children born died in infancy.

In 1952, the shame of these outrageous living conditions was just too much and the State removed and rehoused the 20,000 inhabitants in new purpose-built housing for them.

Still, I can’t help admiring their accomplishment and the sheer perseverance that must have been necessary to forge a city on the mountainside.

In 1993, the area was declared a Unesco World Heritage Site.

Looking for deals on hotels and cheap hotels Matera Italy