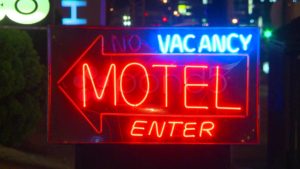 Cheap motels don’t have to be bad motels.
You want to find the best deal for your budget – right?

Budgethotels.com scans 100s of websites to find you the best motel deals from dozens of suppliers. From basic chain motels to family-run gems with classic mid-century design.

Just enter your destination and dates in the box on the left and hit “search”. The resulting list  will show you all our accommodation deals and discounts. You decide if you want to order by lowest price or highest standard.

Sometimes you just want a cheap motel, but we help you find a great hotel or motel, at home and overseas, at a cheap motel price.

Use the search box on the left to find your cheap motel.

The Origins of Motels

Motels first appeared in the 1920s in California.  As the US road network developed so did the need for basic cheap motel accommodation as the routes covered long distances across the country. Motels were developed along major highways and always had the advantage of easy parking – often right outside your motel unit. The peak of their popularity was the 1960s when the ever expanding middle classes took to the roads to explore America. In more recent years as traffic switched to interstates we have seen developments of cheap and branded budget hotels (often franchises) near busy intersections – often with fast food restaurants and gas stations.

Motels are not unknown outside USA and Canada but just may not be called motels. European countries, with their lack of development land, skipped the motel period, but you will find the budget hotel chains at major motorway/autobahn/autoroute intersections.

Try Budgethotels.com for your motel searches and you can be sure we will find you the best deals, whatever the standard of motel you are looking for. Cheap motels, budget hotels, roadside inns and guest houses. We have them all.